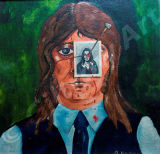 'For in him we live and move and have our being, as certain of your own poets have said. For we are also his offspring.'
Acts ch 17 v
It seems to be customary on a website to have a piece that is a sort of biographical profile coupled with an artist's statement.
Right then here we go. So what shall we say about me then?
I am married to Carol, and we have a daughter, Rebeccah.
I had been interested in drawing and painting when I was young, but poor teaching at school soon dealt with that.
My interest in painting was re-kindled on a school trip when I saw 'Time Transfixed' by Rene Magritte. Even so it was a year or two before I started to paint. One day in 1969 I bought a box of oil paints, some pieces of hardboard, got a book on painting from the library and started to paint in my spare time.
In 1979 my wife and I moved to Suffolk where we still live. I stopped painting for a number of years, but resumed about the turn of the century.
I work mainly in oil, but am very interested in collage in all it's forms.
In recent years I have found that my work is starting to go in different directions, and in different mediums.
I would like to follow where I am led.
I have had work exhibited at Haringey Arts Centre, Walthamstow Art Society Open Exhibition, Halesworth Art Gallery, The Ferini Gallery, Pakefield, The Lowestoft Arts Centre ,Kessingland Library, and The Coconut Loft , Lowestoft, as well as various mixed and group shows.
I also did the illustrations for the 'Lily and Hudson' series in the Kessingland Times, which have now been published as a collection..
I am currently involved with a local Art Group.
.